SOLD €70,000
Property Code: 208
An rare opportunity to buy an historic Tower Dwelling built in 1886 only 65 years after the battle for Independence.
Sea View

An rare opportunity to buy an historic Tower Dwelling built in 1886 only 65 years after the battle for Independence. This Tower dwelling is situated in a traditional Maniate village approx. 400 meters above sea level with spectacular views of the sea, the Messinian coastline and the Taygetos mountains. It is in the center of the village which has its own Kafenion and it is a 10 minute drive to the popular coastal resorts of Stoupa and Agios Nikolaos with their sandy beaches, waterside tavernas and amenities.
The Tower Dwelling is approx. 141 m². It needs complete renovation but could be restored to make a comfortable house using the original stone and architectural features of the dwelling which include the Agii which were used as supports to block up the windows in times of war but are now mostly used for potted plants. It stands on a plot of 70.31 m² and is situated on 3 floors. An arched doorway leads into the courtyard on the ground floor which is approx. 38m² including the arched Kamara (a semi barrel vaulted room) which also used to make the house strong against tremors, later used to house animals and now usually turned into a bathroom or extra bedroom. This has an opening to the first floor so a staircase could easily be constructed. Stone steps lead up to the first floor which consists of a spacious lounge, a secondary room and a kitchen area approx. 52 m² in all. Stairs lead up the second floor which consists of large room approx. 52 m² with windows all around from which there is a spectacular view of the sea and the mountains.
This Tower Dwelling would suit some who has an interest in the history of the Mani and who is looking for an architectural renovation project of an historic Maniate Tower Dwelling. 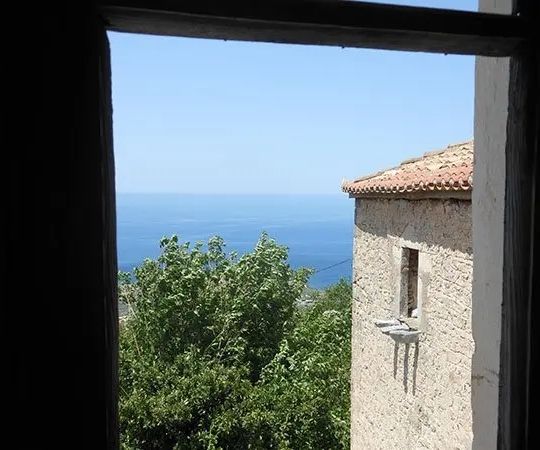